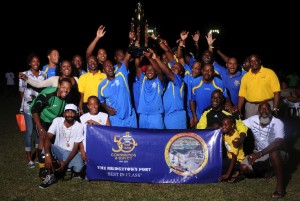 BL& P were sporting a younger, trimmer team however the Port Inc. veterans completely dominated the pace of the game. In the first half although having the majority of the possession the BL& P men could not penetrate the Port defence which was led by former national player, Maurice Gaskin. The first half score was 1-0 to the Port.

The second half of the game however completely belonged to the Port. Renaldo Seale who opened the scoring in the first half completely stunned BL&P with a quick goal right at the start of the second half. Wearing the famous number 10 jersey he did the number justice completing a hat trick.

BL&P had a consolation goal in the dying minutes of the game but a beauty from Ricardo Grant off of Maurice Gaskin left side cross sealed the game for Port Inc.

There is scope for Barbados to create its own prosthetic limbs to fit many amputees on the island.

This observation was made by the President of the Barbados Diabetes...

Barbados Port Inc. (BPI) has proudly announced its involvement in the restoration of the historic East Point Lighthouse in St. Philip. The restoration project, to be...
PRMR Inc. Publishing
Read More