The Barbados Olympic Association Inc. (BOA) recently hosted students of primary and secondary schools at its Wildey headquarters as part of the activities to commemorate Olympic Day.  Olympic Day is celebrated annually around the world in June, to promote fitness, well-being, culture and education, along with the Olympic values of excellence, friendship and respect.

Director of the National Olympic Academy (NOA), Vaneisha Cadogan, coordinated her first Olympic Week observance in this position. “Embracing the Olympic Day focus, Move, Learn, Discover, we ensured that we incorporated these three concepts in the activities held during our Olympic Week celebrations. The experience was rewarding and inspiring”, said Cadogan. 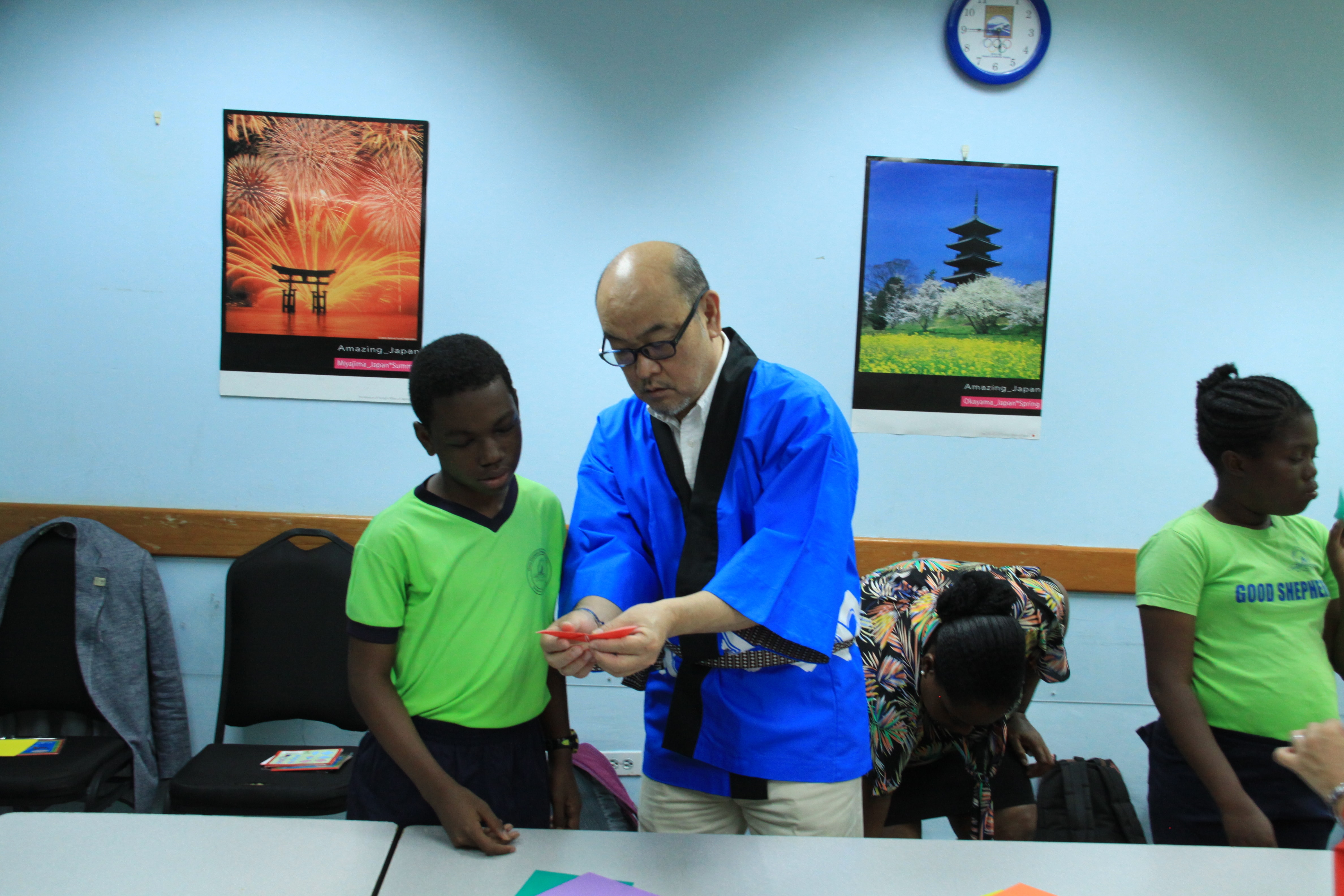 His Excellency Teruhiko Shinada, Embassy of Japan demonstrating to a student how to create origami.  Photo credit: Corie Elcock

This year the BOA received support from UNICEF, Sagicor General and the Embassy of Japan to stage the Olympic Day activities, the first of which was a Fun Day for primary schools.  The event, which was titled “Discover Tokyo 2020,” treated 240 students from 16 schools to a tour of the BOA museum and tag rugby, among other enjoyable and educational activities. They were also exposed to Japanese culture through dance and making traditional origami. The Embassy of Japan provided support for this event. In addition to donating Japanese keepsakes for each child and the resources used for the origami, three members of staff taught the art form to all the children attending the Fun Day. They also led the children in the Japanese dance choreographed for the 2020 Olympics. His Excellency, Mr. Teruhiko Shinada was present at the event.

On the second day, secondary school students participated in a workshop titled “Learn and Transform – Sport as a Tool for Peace”, which was sponsored by UNICEF.  Robin Parris delivered a presentation on the issue of safeguarding in sport while John Jones, a former pro basketballer, was invited to share and inspire the student-athletes to acknowledge that they have a responsibility to be leaders of change. The students were required to identify an issue at their school and develop projects to address them. The proposal presented by the students of the Lodge School was adjudged the best project and will receive financial and administrative support from the NOA for its implementation.

Sagicor General continued to show its support for this annual celebration through its financial donation to assist with the week of activities.

Olympic Day To Be Celebrated Online in Barbados

The Barbados Olympic Association (BOA) Inc. today announced that the activities to commemorate Olympic Day 2020 on June 23 will all be online for the first time in the...

The Barbados Olympic Association Inc. (BOA) is again hosting the annual Olympic Day celebrations from June 21 – 26. There are four main activities planned which include...