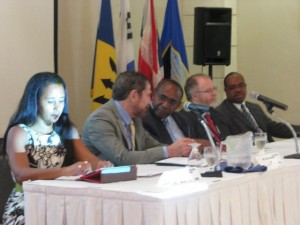 UKAid from the Department of International Development (DFID), GVEP International, South Korea and the Inter-American Development Bank (IDB) have launched a contest to develop innovative ideas to improve energy efficiency and expand access to renewable energy in the Caribbean.

The contest, launched today with a regional marketing campaign What’s your bright IDEA?, is intended to promote innovative solutions to energy problems that have local or regional benefits, provide jobs and reduce greenhouse gas emissions. Award winners will receive up to US$200,000,as well as technical and business development support to implement or scale up their ideas.

Individuals, enterprises and organizations based in the Caribbean are invited to submit proposals focusing on adoption, innovation, assimilation, development and transfer of technologies in renewable energy, energy efficiency, climate change mitigation and fossil fuel substitution by April 30, 2012. Applications should be submitted electronically - details and guidance are available at www.iadb.org/ideas. Grant winners will be announced July 15, 2012.

“The Caribbean has great potential for economically and environmentally sustainable enterprises in renewable energy and energy efficiency,” said Simone Banister, Climate Change Adviser at DFID Caribbean. “Simple innovations could have a dramatic effect on energies supplies, prices and the way businesses and markets operate in the region.”

Energy in the Caribbean is currently produced almost exclusively from imported fossil fuels, Banister explained. “As a result, consumers are paying high prices for electricity, transport fuels and other forms of energy. So far, the use of alternative sources of energy, particularly renewables, has been limited. We’re hoping to help change that.”

“Local innovation and the adaptation of existing technologies to local circumstances are key to boosting the competitive supply of renewable energy services and tackling environmental concerns”said Arnaldo Vieira de Carvalho, Lead Energy Specialist at the IDB.

IDEAS is an Energy Innovation Contest to support the development of innovative projects promoting renewable energies, and improving energy efficiency.. IDEAS was first launched in February 2009, with the support of the Inter-American Development Bank (IDB), the Government of Korea, non-governmental organization GVEP International and the German Technical Cooperation for Development (GIZ), and funded by the Ministry for Economic Cooperation and Development of Germany (BMZ) and the Netherlands Directorate-General of Development Cooperation (DGIS). It received over 1,000 applications from 28 Latin America and Caribbean countries. A total of 26 winners were selected in Argentina, Brazil, Colombia, Chile, El Salvador, Guatemala, Honduras, Mexico, Panama, Peru, Saint Vincent and The Grenadines, and Saint Lucía.

A second phase of IDEAS was launched on September 15, 2011, in cooperation with the Mexican Secretariat of Energy with the support of the Sustainable Energy Fund (FSE), the IDB and the South Korean Government to promote innovation in sustainable energy. More than 700 applications were received from Latin America and the Caribbean, and 15 winners were selected from Colombia, Costa Rica, El Salvador and Mexico. For more information: http://www.iadb.org/ideas.

About the sponsors and implementing partners:

The UK Department of International Development (DFID) will contribute £75m in UKaid to the Caribbean between 2011-15, supporting enterprise development, governance and security and action on climate change. DFID is providing a high proportion of the funding for this contest (equivalent to GBP £1.46 million).

The Global Village Energy Partnership (GVEP International) is a UK-based NGO that works with local businesses in developing countries to increase access to modern energy and to improve the quality of lives for thousands of people. DFID has chosen GVEP International as its implementing partner for IDEAS.

The Inter-American Development Bank (IDB) is the largest source of financing for development for Latin America and the Caribbean. Through its Sustainable Energy and Climate Change Initiative (SECCI), the IDB supports renewable energy and energy efficiency, biofuel development, carbon finance, and adaptation to climate change.

The South Korean Government supports Latin America and the Caribbean’s efforts towards improving energy access, efficiency, and producing renewable energy, including through the “Knowledge Partnership Korea Fund for Technology and Innovation” (KPKF) at the IDB.