Speaking at a brunch in celebration of the Port’s 50th Anniversary was Chief Executive Officer (Ag), David Jean-Marie, who revealed, “The current board of directors has approved a cost living adjustment to your pensions and this will be effective from January of this year.”

He was at the time outlining some of the achievements and proactive measures being undertaken by the Port, which he described as the centrepiece of Barbados’ social and economic development. 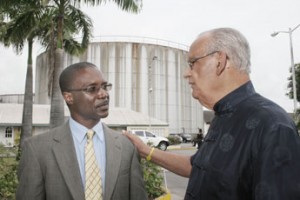 This includes the Port Master Plan, a complete separation of the cargo from cruise; the development of the central container examination facility in conjunction with Customs and completing berth number five to ensure that there is a dedicated cargo berth. The CEO said there will be a need to replace the current cargo handling equipment which could come to a whopping $50 million – ironic since the Port itself was built for $30 million, which at the time was considered to be a major investment.

Other accomplishments include the upgrading of Shed 1 to a passenger terminal back in 1985, which he said was a proactive decision to enable the Port to handle an increase in passenger numbers.

He explained that there has also been an increase in the movement of cargo, from 175 000 tonnes when opened to 1 million tonnes being handled on a daily basis.
He said great emphasis continues to be placed on security, human resource development and training and revealed that the Barbados Port is working with the Caribbean Maritime Institute in an effort to certify all Port workers.

The CEO also took the opportunity to thank the stakeholders and partners of the organisation including the Barbados Workers’ Union which he described as the most influential organisation operating within the Port. (JH) 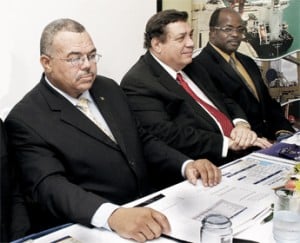 Port preparing for the next 50 years 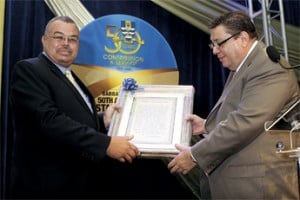 Government has embarked on plans to reform the cruise facilities in Barbados for the country to remain relevant and capitalise on the opportunities available from...