The Scorpion and The Frog: The nature of the relationship between journalism and PR?

The panel discussion hosted by the IABC and CARILEC, focused on the relationship between journalists and public relations practitioners: ‘Kissing cousins or Mortal enemies.’

Typically public relations experts act as the sources but this does not basically change the nature of this dependence, although it might change its degree. It is of note that pr experts also depend on journalists to reach their audiences. This dependence is even more crucial for public relations practitioners whose work consists of distributing information about the source they represent in an effort to make their clients information “news worthy.” We cannot succeed in our job unless we work with the media. The nature of the relationship between journalists and pr practitioners is based on cooperation.

At the discussion, were top news gatherers and pr experts such as Kaymar Jordan, Editor-in-chief of the Nation News, Roy Morris Editor-in-chief of Barbados Today, Roger Joseph, Corporate Communications Manager of LULEC and Emmanuel Joseph, President of the Barbados Association of Journalists met to discuss this relationship.

The lively debate demonstrated that public relations and journalism seemed to be steeped in a long history of stormy yet cooperative relations. Jordan explained to the audience “ a very good pr piece is not a good news story, and a good pr publication is a poor newspaper. Journalists are interested in hard news, but PR people only interest is to projecting their clients in the best light, whether this be truthful or not.” Her statements helped to fuel the evening’s discussion.

Those PR practitioners in attendance agreed that this statement was harsh given the code of ethics, which many pr practitioners have sworn to live up to. Nonetheless some PR practitioners are perceived like a scorpion, simply as ‘spin doctors’ who alter the truth to please their clients. Instead of working with journalists to help them deliver news to the public, which is true and accurate, they provide the journalists with ‘fluffy’ versions of the truth, which result in the demise of the reputation of the media house and the pr practitioner.

What must be recognised is that situations most often determine how pr practitioners act. Very often it is clients who fear the media, and are apprehensive about telling the media the truth that push PR experts into ‘spinning.’ The PR practitioner does not want to lose clients and must therefore do as he/she is told. 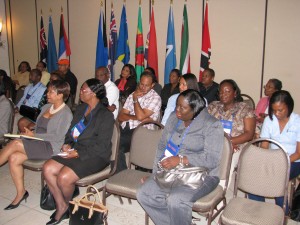 Section of the Audience at the Savannah Hotel

In the story of the frog and the scorpion, the frog was surprised when the scorpion bit him. However upon questioning the scorpion’s motives, the scorpion simply responded because “that is my nature.” Had the frog understood this he would not have been so surprised by the scorpion’s actions. Perhaps they would have worked together to find an alternative way across the river.