Government has embarked on plans to reform the cruise facilities in Barbados for the country to remain relevant and capitalise on the opportunities available from cruise tourism.

That is according to Minister of International Transport, George Hutson who delivered the feature address at the Barbados Port Inc.’s 50th anniversary staff awards ceremony at the Hilton Barbados on Saturday night.

Minister Hutson stated that cruise passenger numbers have been growing at an average of some four per cent over the past ten years.

“In 2010, just over 745 000 cruise passengers sailed into the Bridgetown Port while there were 414 cruise ship calls that year,” he informed.

According to him, the port has already seen an increase in passenger arrivals in 2011.

“For the period January to July 2011, 486 833 cruise visitors have visited our shores as compared to 460 466 for the same period in 2010. This is an increase of 5.73 per cent. Our statistics highlight that the last cruise season, October 2010 to April 2011, was the best cruise season on record in terms of numbers of passengers.
Concurrently, the number of cruise ship calls have declined as ships have become larger and requiring more dedicated berths with specialised infrastructure...” he continued.

The Minister of International Transport stressed that cruise tourism is a critical element of the long-term sustainable development of tourism in Barbados.

“Consequently, Government has embarked on plans to reform the cruise facilities in Barbados. If we are going to remain relevant, if we are going to capitalise on the opportunities available from cruise tourism, we must renew our plant from the basic infrastructure currently existing to one which will accommodate and service the increasingly large cruise ships, addressing the aesthetic image of the facilities, the shopping and entertainment structure for cruise passengers,” said Minister Hutson.

He stated that to complement the work in the cruise industry, the port will move to create additional facilities and services in the cargo sector. These will include extending berth five, installation of a crane, replacement of equipment fleet, construction of a central container examination facility and paving of an additional five acres. 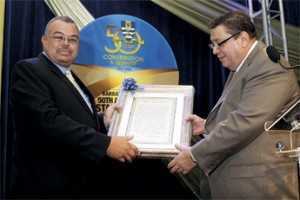 He added that new initiatives must be implemented to utilise the sugar bond that was designed to handle over 100 000 tonnes of sugar per year, in the face of the local sugar industry now only producing some 25 000 tonnes.
Minister Hutson noted that this strategy for the Port is consistent with the Government’s short to medium term development plan which speaks to the creation of Barbados as the hub for cruise activities in the southern Caribbean, increasing the economic benefit from cruise tourism and organising port facilities to separate cruise from cargo.

“The potential benefits to this project reinforces the policy position towards the development of Barbados as a cruise tourism hub and to reposition the country as the leading cruise destination within the southern Caribbean,” he stressed.

At the ceremony, Minister Hutson presented to the Barbados Port Inc., the original handing over certificate which marked the completion of construction of the port in 1961. Staff, former staff, stakeholders and departments were presented with awards for their contributions and service over the past fifty years. (AR)