Beach Scenes and Beautiful Sunsets were among the sights at the third annual Easter Bonnett Parade, hosted by the Barbados Port Inc. last Friday. The bonnets on show rivaled the best in Barbados and anywhere else in the world.

The Easter Bonnett Parade is one of the most anticipated and exciting features on the Port's social calendar. Members of staff of the Port, compete before a panel of judges in self-deigned bonnetts with various themes. This year the bonnetts depicted Easter promises, lovely flower gardens, a day at the beach and a beautiful sunset scene that left the audience in awe at the array of colours and creativity.

Ms. Meshelle Rawlins, is a member of staff of the BPI and organiser of the parade. She said "I enjoy organising the parade and the creativity displayed by the participants each year. The contestants put in alot of effort, and it certainly shows in their designs."

Ultimately, it was Veronica King's The Promise that won the Best Bonnett as well as the Most Colourful. Jackie Collis' Beautiful Sunset was second and Nicole Gooding's The Parable of the Sower was third. Olivia Carmichael's Bajan Beach Easter was unique and as a result she took home the first prize for the Most Original Bonett in the show. Gooding was also second and Kerry Ann Deane was third with her Easter Fairytale. 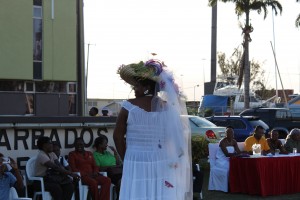 Ms. Rawlins promised that next year would include a section designed to encourage the male staff to get involved in the parade. "We don't want to leave anyone out. Each year the Bonnett Parade has grown and we want to continue this trend."

She congratulated all of the participants and thanked her team for the support they provided in making the event a success.